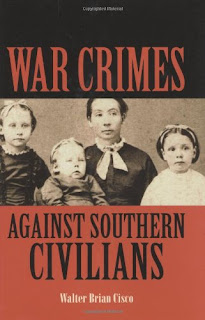 "This is the untold story of the Union's hard war against the folks of the Confederacy.  Styled the "Black Flag" campaign, it was agreed to by Lincoln in a council with his generals in 1864.

NOTE:  The protestant cities were wasted.  Papist cities were not molested.  In Richmond the only building left standing was the masonic lodge.  While everybody else in Richmond mourned, Judah Benjamin was unable to hide his jubilation.

DIVIDED WE STAND The Crisis of a Frontierless Democracy Hardcover – January 1, 1944